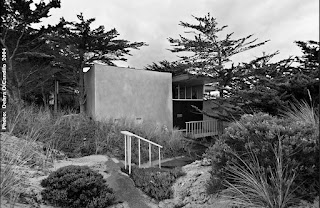 What   EIR Scoping Meeting
Where Pebble Beach Community Services District Office 'Conference Room',
3101 Forest Lake Road, Pebble Beach 93953-2949
Why     Public Support (your voice and/or public presence) to Demonstrate to EIR Writers and County of Monterey that we STAND BY our determination that this local example of Richard Neutra's work is signification to his architectural lexicon and should not be allowed to be demolished by the current owner for new larger home.
‪#‎Neutra‬ ‪#‎Preservation‬ ‪#‎Historic‬ ‪#‎Modernism‬
NOTE the three initial potential impacts that have been identified:
1. Impacts from the demolition of a building listed in the California Register of Historical Resources and eligible for listing under the National Register of Historic Places;
2. Impacts from development on the native sand dune environmentally sensitive habitat;
3. Impacts on views from "public viewing area" including along 17-Mile Drive.

:Past ACTION::
CONNELL HOUSE by Richard Nuetra - PUBLIC COMMENTS NEEDED
What   Monterey County Historic Resources Review Board Meeting (HRRB)
When Thursday, October 3, at 11:30 am
Where Monterey County Administration Building, 168 W. Alisal, Salinas, Ca 93901 in The Monterey Room, Side A, Room #2092.
Why     We are being urged to speak out about the demolition permit being applied for by the current owner of the "Connell House" in Pebble Beach, designed in 1958 by renowned modernist architect Richard Neutra.

ACTION: neutral Re-scheduled to August 29, 2012
Decision as of that date: see above

It notes the status (for the Parks Dept) as complete; however, there are recommended conditions:

"According the Monterey County’s Cultural Affairs Manager, Meg Clovis, the historic resource consultant has declared the structure proposed to be demolished as a significant historic resource, and therefore the project has a significant environmental impact. Therefore, CEQA requirements require the preparation of an Environmental Impact Report."
[note: emphasis in bold above made by mbm]

Though this document was originally dated November 29, 2010, the recommended conditions appear to be recent.

Title of Document:
"RESPONSE AND REBUTTAL TO COMMENTS BY CIRCA: HISTORIC PROPERTY DEVELOPMENT AND BILL BERNSTEIN, AIA ON AN EVALUATION OF THE CONNELL HOUSE PEBBLE BEACH, CALIFORNIA RECORDED BY ANTHONY KIRK, PH.D. 15 OCTOBER 2010" - 27 pgs.

"CONCLUSION
The Connell house is unequivocally an important example of the American
International style, perfectly illustrating this design aesthetic within the context of
the development of modern architecture in Pebble Beach.18 Despite a small addition
and various alterations to some of the fenestration, it retains historic integrity. In
my opinion, the Connell house is eligible for listing in the California Register of
Historical Resources at the local level under Criterion 3."

To download and read the full document, follow the first three steps below for the project.
Under Related Records, click to view LIB12012, dated 04/25/201.
This will be the pdf version of the document.

with permission from
Gretchen A. Hilyard:  President, DOCOMOMO/NOCA
of
docomomo_us

Re: Connell House (1170 Signal Hill Road, Pebble Beach, CA. Permit #PLN100338)
Dear Ms. Robinson,I am writing to express our support for the preservation of the 1958 Richard Neutra-designedConnell House in Monterey County, California. DOCOMOMO/NOCA is the Northern Californiachapter of the international non-profit organization Documentation and Conservation of theModern Movement, established nearly 25 years ago to provide leadership, education, andadvocacy assistance to people committed to saving places and collectively shaping the future ofAmerica’s stories.We have recently become aware of the endangered status of the Connell House (1170 SignalHill Road in Pebble Beach, California), with the proposal to demolish the building in favor of anew design. As detailed below, the unique qualities of this structure and its importance to thecommunity should be carefully evaluated before any changes to the site are considered.The works of Richard Neutra are regarded as some of the most inspiring and forward-thinkingdesigns of the 20th century. An Austrian-born immigrant, Neutra worked with Frank LloydWright before moving to Southern California. He is best known for his work in this area,including the Lovell “Health” House in Los Angeles (1927-29) and the Kaufman “Desert” Housein Palm Springs (1946-47), projects that influenced residential design throughout the country.A self-proclaimed “bio-realist,” Neutra worked tirelessly for more than 60 years to create builtenvironments that enhanced basic human relationships and promoted people’s connection tohis surroundings. He is one of only a few architects that have appeared on the cover of TimeMagazine (1949) and he was the recipient of numerous architectural commendations andawards. His own legacy and that of his family is indelibly etched into the built landscape ofCalifornia today.The history of the Connell House and its significance is well known. Letters written on behalf ofthe house by prominent architectural scholars, including Thomas Hines and Barbara Lamprecht,detail the singular design approach employed by Richard Neutra at this site and thedistinguishing features of the building. More importantly, perhaps, is that the Connell House isone of a constantly diminishing number of surviving designs by Neutra, a master architect whomade a major impact in the building history of the U.S. and abroad. To succeed in the originalplan to demolish will result in the loss of yet another piece of our unique collection of Americanmodern architecture and significant damage to the integrity of the remaining Neutra works.We are encouraged and hopeful that we can begin to save and celebrate those buildings thatdistinguish Northern California as one-of-a-kind in the world. In light of significant historicevidence, DOCOMOMO/NOCA requests demolition is delayed and the owner work towards asolution that respectfully considers the historic significance of the building.
Please feel free to contact us for more information, or if you have specific questions andconcerns.
Sincerely,Gretchen A. HilyardPresident, DOCOMOMO/NOCA
Cc: Massy Mehdipour, property owner;Karen Lesney, Monterey Bay Modernism

Delinda Robinson,
Monterey County Planning Department,
168 W. Alisal St., 2nd floor,
Salinas, CA 93901.
Dear Ms. Robinson,
It has come to my attention that a historical properties consultant Sheila McElroy has determined that a 1958 masterpiece of my father Richard Neutra is not of historical significance and can be torn down because it is not among the most famous of his works around the world and because it is not an early example of the Bay Area Modern School. Another historical consultant Anthony Kirk believes that it IS significant and "reflects" the sensitivity to the site that was characteristic of that Bay Area movement.

When Mr. Connell came to my father in SOUTHERN California to design a house for him in the unique community of Pebble Beach he was coming to an architect who had been on the cover of Time Magazine a few years before where he had been characterized as "second only to lordly Frank Lloyd Wright." My father was really unique among the early modernists in the intensity of three commitments: Focussing on the psychological and practical needs of the client, committing to the nature-centered esthetic transmitted from Japan through Frank Lloyd Wright and trying to achieve these goals with inexpensive modern technology. Time recognized him because he had been pioneering this approach since the late 1920's. All through this period his work was published in Europe, South America and Asia. American architectural historians notice his clear influence on Southern California mid century architecture, which followed him in avoiding local cultural forms. The Bay Area architects disapproved of this feature of my father's work and that of those he influenced.    European architectural historians have noted his impact after WWII in Europe, Morocco, South American and Asia. His continuing reputation is international as witnessed by a recent museum exhibition on his European works at MARTA Herford Germany.

There was one area where the later Bay Area modernists agreed with my father.  They both had a commitment to nature and the site.  The Bay Area modernists, somewhat later than my father were influenced by the Japanese and Frank Lloyd Wright in this matter.  My father came from Vienna in 1923 to learn about American building technology, but also to work with Frank Lloyd Wright who was his idol as a student in Vienna before WWI.  He worked with Wright for half a year in 1924 and when he came to Los Angeles in 1925 did landscape designs for Wright's Hollyhock house.  He wrote a book in 1951 entitled “Mysteries and Realities of the Site.”

The Connell House is a mature work of the Neutra firm. It shows that it is possible to meet the psychological and practical needs of the client, protect the views of neighbors and take full advantage of a subtle and wonderful natural site without the vernacular allusions of the Bay Area Moderns. It displays the interplay of horizontal and vertical planes that characterizes his work.

It is the only example of the work of this internationally influential architect in Pebble Beach and Monterrey County and is a pure example of the Southern California School of architecture in this northern California community. It is interesting that Mr. Connell chose to import this famous founder of that school of architecture to the sand dunes of Pebble Beach. Please preserve this beautiful building.

Date:Thursday March 1, 2012 at 11:30 am
Location: Monterey Room at the Monterey county Administrative Building in Salinas, CA.

Though this project is not listed as an action item, it will more than likely come up under NEW BUSINESS, Item 4 under Preservation Updates.

Public comment is scheduled for the beginning of the meeting - if you wish to attend and voice your support, please join us.

For more information under Causes for guidance to see planning permit number and to look up available public comments.

FOLLOW UP
presented to the board (beginning of meeting for public comments) that there is now a public petition campaign to save the Connell Residence via 'monterey bay modernism'...gave them web information to find us and was given a nice nod of approval for our efforts.

i am currently on hiatus.
will be back soon

to promote community awareness and preservation of our 20th century modern monterey bay architectural past.

Neutra 'Save the Connell House'

other petitions to consider